As we thought about a Talk’n TROUBLE topic for November ‘22 a poignant question came up: Is there a way to link Thanksgiving with the tension between the appreciation for all we have; for what we have all accomplished, and the weighty steps back we see; the signals of so much change needed ahead? The answer: We should try because that’s exactly what we’re feeling.

Let’s consider that tension; As an organization, TROUBLE has a pretty great track record so far but, we want to do more. We deeply appreciate our partners, and you, and are proud of what we’ve all done together in our brief history. We’re proud of the role we’re playing in the progress of gender equity in our communities. At the same time, the need for that progress we are all about is getting bigger by the day. It can be difficult not to be discouraged when the equity we seek is itself under attack – seemingly everywhere. 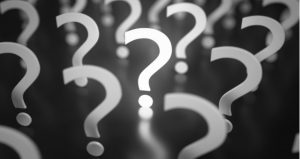 “Throughout the last century, women’s movements won the right to vote for women; expanded women’s access to reproductive health care, education, and economic opportunity; and began to enshrine gender equality in domestic and international law—victories that corresponded with unprecedented waves of democratization in the postwar period. Yet in recent years, authoritarian leaders have launched a simultaneous assault on women’s rights and democracy that threatens to roll back decades of progress on both fronts.” – foreignaffairs.com

A patriarchal backlash is happening right here in the U.S., and around the world. Women and minorities are losing ground, being pushed back, silenced, marginalized, persecuted, and worse. Documented examples come from China, Russia, North Korea, Egypt, Bahrain, Saudi Arabia, Afghanistan, Brazil, Hungary, Poland, Turkey, Honduras, and Mexico. Political and economic empowerment has stalled, halted, or been reversed while violence and abuse are on the rise.  georgetown.edu

In the U.S. we found ourselves stunned by the SCOTUS overturning of Roe v. Wade. The regression of our reproductive rights may be just the start. We’re seeing the erosion of social, economic, educational, and political progress. All the standard weapons of oppression are being wielded right here at home; manipulative media, right-wing politics, bigotry, and religious zealotry. Intimidation and violence are chipping away at a foundation we thought was so solid. The world is at a tipping point. We need an understanding of history and the power of our convictions to keep ourselves from sliding back even further. We need to make TROUBLE now to stop the back-peddling and the theft of our rights; to reassert our power and regain the momentum we so recently enjoyed – and perhaps naively took for granted. Frankly, we need to collectively get angry and active. 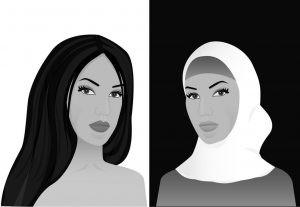 The women of Iran are angry and active. Their nation’s leaders have been systematically stripping them of their rights for two generations. Since the monarchy was toppled in 1979 a religious totalitarian regime has sought to “remove autonomous, independent women from the public eye and replace them with the representation of veiled religious devotees.” By 1983 the government had succeeded in making the wearing of the hijab compulsory for all women. The symbolism of that mandate might be lost on many western women. The head covering is a religious emblem, a cultural tradition, and a public declaration of faith when worn by choice. But, to have one’s choice taken away changes everything. At the time of the decree, the women of Iran reluctantly covered their heads and chose instead to focus on efforts to regain more life-impacting rights; “like the rights to initiate divorce and obtain child custody, and a ban on child marriage (they did manage to get the marriage age for girls raised to thirteen from nine, but nine-year-old girls could still be wed with a judge’s approval) through petitions and dialogue with the regime.

The state made no concessions in return, however, and used oppression and violence to squelch the activists’ demands, even those as benign as allowing women to enter sports stadiums. By the end of the 2000s, the activists had reached a dead end.” – journalofdemocracy.org (Let that sink in)

Since then the movement has become more radical, innovative, and effective. Today the women of Iran are conducting a new kind of revolution. Their fearless and modern response to a brutal regime is gaining momentum by quietly turning the people against the medieval power structure there. The use of social media is serving to shield them from the perils of public protest. By broadcasting their dissent and amplifying their message to a global support network they’re making real TROUBLE for the establishment. Of course, that effectiveness stokes the fury of the oppressors. The government is reportedly detaining outspoken youngsters in order “to ‘reform’ the protesting students and rid them of their ‘anti-social’ behaviors.“ – cnn.com

On September 16, 22-year-old Mahsa Amini died in the custody of the Iranian Morality Police. Her death catalyzed a stunning outbreak of protests in cities across Iran. Amini was arrested while vacationing in Tehran for wearing her head covering too loosely. The history of mandatory veiling in the Islamic Republic of Iran illustrates how totalitarianism has ironically nurtured a liberal-democratic worldview within Iranian society. Over time the women in Iran have succeeded in slowly educating the public and sapping the ideology of the regime. Once passive bystanders who silently supported progress are being motivated to come into the streets and protect the outspoken.

CNN reports “This year’s protests are different – in their scope, scale, and unprecedented feminist nature. There is also mobilization across the socio-economic divide. A young generation of Iranians is on the streets rallying against decades of repression – arguably bolder than ever.”

We started this post with a question. Here’s another: How much are WE willing to tolerate when it comes to oppression? First, we have to travel to avail ourselves of reproductive health care, then that care is criminalized everywhere. First, we tolerate gerrymandering and voter intimidation, then corrupt officials discard our votes to steer the outcome of elections. First, we tolerate the dismantling of FCC rules of fairness, then our fellow citizens are brainwashed with truth-denying about everything from election outcomes to insurrection and climate crisis. One more: How will we spread the truth, regain momentum, support progress, and make TROUBLE for good in our times

As we look around the world at the growth of threats to freedom and equity all around us we have to admit, it could be worse (and may get worse), and we have a great deal to be thankful for. We still have time to make TROUBLE; to call out and confront the threats to our rights. We still have mobility and autonomy that affords us the ability to fight back. We are thankful for access to truth and an understanding of the past that can help us navigate these challenging times. TROUBLE will celebrate this Thanksgiving with the knowledge that women are powerful; that we care about each other and the future of our kids and our country. TROUBLE is thankful for you. 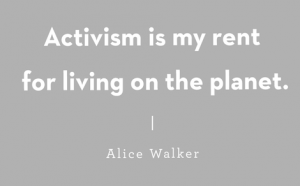