TROUBLE is proudly marking its second anniversary this fall. “Marking” – not really celebrating, given the social and political conditions we’re in. Things aren’t where we had hoped they would be two years in on our mission to promote gender equity. The backlash against women’s social progress in our country and around the world has been sobering, to say the least. The current state of affairs does encourage us, though. We continue to be energized by our Trouble community. We’re so grateful for the ongoing support and guidance we’ve received from our awesome Trouble Advisory Board. These 2 years have been chock-full of generosity and inspiration.

So far, Trouble has posted inspiring interviews with 79 influential TroubleMakers and distributed over $150,000 in support of TroubleGiving partner organizations! It’s been a privilege to play a supporting role and witness the remarkable impact of those who do the challenging and necessary work of making Trouble for Good every day.

Today, when we think of how our launch coincided with the 100th anniversary of the 19th amendment, we are especially motivated! There’s no time to dwell on any disappointment. The collective power of women – then and now – is formidable. Let’s use it in the upcoming mid-terms. Get out there and vigorously exercise that hard-won right to vote! We all owe it to those badass TroubleMakers who won it for us. It’s our turn now. Backlash be damned! We’re going to fight OUR fight in this century and take back that lost ground. We need to keep the window for change open…wide OPEN. We will not wait another 100 years for progress. Will you?

The 2022 mid-term election season is already like no other any of us has experienced in our lifetime. It feels risky to raise any political or social issue publicly. Even if we’re not, people believe we are deeply divided. It feels like we’re living in the pages of a Margaret Atwood novel. (Have you read The Handmaid’s Tale?) From devastating SCOTUS bombshells to the rise of white nationalism. We’ve got climate science deniers and librarians under attack. All against the backdrop of drought, fires, and rising gun violence. The author herself said on the Ezra Klein Show that she believes we are engaged in “an arm wrestle for the soul of America.” Build up your biceps, TroubleMakers! 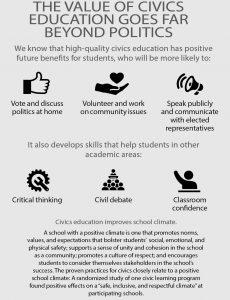 Amidst all the chaos, it’s painfully evident that knowledge of how democracy is supposed to work is at an all-time low. Incredibly, most states require only a half year of civics curriculum. All kids used to learn a few core principles.

The choices facing us today are profound. Voters need to select representation carefully – from the school board to Congress. Our future as a nation and a species depends on what happens next. As usual, women have the most to lose or gain. According to the League of Women Voters, “we are at a moment of truth in our country.” The question is, whose truth will prevail?

Traditionally, mid-term elections have been a scorecard on the current president, and it’s typically the state of the economy that sways voters one way or the other. In a Northeastern News article, writer Molly Callahan says it’s not just the economy this time. She claims the issues that matter most this year will reveal our morals. Some voters prioritize gun violence, abortion rights, election laws, and climate change. Others see inflation and immigration as most important. Professor Rory Smead says, “There’s no one answer, just answers that align with voters’ worldviews. We’re not voting on any single issue.”  Weighing competing values against each other to choose the right candidate takes time and effort. He calls the task “an unbelievably difficult calculation.”

Add to the moral challenge all the distractions and diversions voters face. Social media, fake news – new techniques and technical means competing with progress in new ways. But the goal is not new. Sewing discontent and promoting disinformation accentuate the divides across age, racial, ethnic, educational, and party lines and keep the public off balance. Discord makes building coalitions for change even harder. In direct defiance of the landmark Voting Rights Act of 1965, some states are actively making it difficult for certain citizens to vote. So, knowing precisely how to correctly cast your ballot can be a challenge. “You need identification to vote on Election Day in 33 states. In 12 states, you need a notary or a witness to vote by mail. Additionally, eight states have excluded COVID-19 as a reason to vote by mail.” – NBC Plan Your Vote

We know the democratic system doesn’t work when people don’t vote. Whatever they believe the greater good to be, citizens in a democracy have to participate. It’s our responsibility to pay attention, make informed decisions and go to the polls. We have to keep on pushing back and continue our progress. Get right in the face of all the retaliation! If you’re not registered to vote, please DO IT NOW! Voting by women will save democracy (again). Live the motto! “Women who make Trouble change the world.” If you have the means, volunteer to transport people in your community to their voting location. Every vote matters. Right now, more than ever.

Casting a ballot in every election – local, state, and federal – is our civic duty. It’s our fundamental, hard-won right to Make Trouble at the ballot box. Please plan your vote. Do your part. Make your voice heard. Vote in honor of all TroubleMakers – past, present, and future.