Each one of us might envision different things when we see that word. This time of year especially, many Americans might picture the U.S. flag; all red, white, and blue. And icons of July 4th celebrations; hamburgers, hot dogs, fireworks, and hometown parades. Some might lament that life is easier and more independent for the fortunate few. What does “independence” mean for you?

Lady Liberty in New York Harbor is emblematic of our Nation’s independence. She is the definitive symbol of the values we share with freedom-loving France, welcoming the tired and poor to this land of opportunity. – (Little known fact, the broken chain motif at the feet of the statue was meant to symbolize the abolition of slavery, not immigration as is widely believed.) 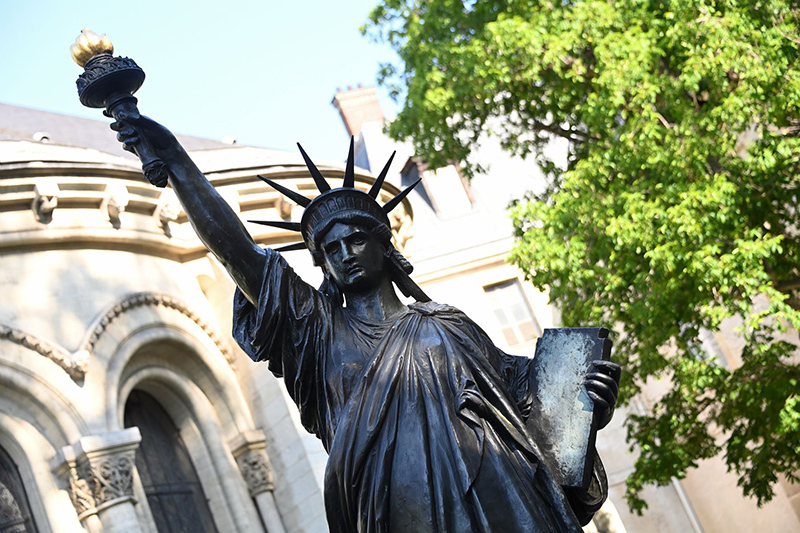 Paris renews our vows by sending ‘Lady Liberty’s ‘Little Sister.’  On view from July 1st to July 5th, 2021 on Ellis Island! Arriving in New York City for Independence Day, traveling to Washington, D.C. on Bastille Day, the 9-foot, bronze statue of Lady Liberty was created from the original plaster model of 1878 by Auguste Bartholdi, and is usually exhibited at the Museum of Arts and Crafts in Paris. Olivier Faron, general administrator of CNAM, told CNN. “We want to send a very simple message: Our friendship with the United States is very important, particularly at this moment. We have to conserve and defend our friendship.”

Consider the U.S. Declaration of Independence. Perhaps the most quoted lines in it are the preamble. “We hold these Truths to be self-evident, that all men are created equal, that they are endowed by their Creator with certain unalienable Rights, that among these are Life, Liberty and the Pursuit of Happiness….”

The interpretation of “all men” has been contested. Rights advocates, such as Elizabeth Cady Stanton, Abraham Lincoln, and Martin Luther King, who used the Declaration of Independence to demand equality for women and African Americans, have interpreted “all men” to mean humanity.

Some opponents of those activists argued that Jefferson and the other authors of the Declaration meant to exclude women and children. There’s no proof of that but, a surviving draft does show evidence of the following revision: created equal & independent.

Historically, Independence often refers to the ability of states to practice self-government. Trouble is, women and girls have not always equally enjoyed the same autonomy as men and boys, even in those independent nation-states. There is a separate history and a different perspective based on our experience of Independence, our rights and freedom, and our “Pursuit of Happiness.”

In Western cultures, ideas of liberty and equality were amplified by both the French Revolution and the birth of the United States. In 1792 in London, Mary Wollstonecraft considered how those ideals related to her and was inspired to publish Vindication of the Rights of Woman.

In it, she wrote, “She must not be dependent on her husband’s bounty for her subsistence during his life or support after his death…How many women waste life away, the prey of discontent, who might have practiced as physicians, regulated a farm, managed a shop, and stood erect, supported by their own industry, instead of hanging their heads….”

Isn’t that cool? That was 1792! Unfortunately, very few were moved or inspired by her writing at the time.

At the end of the eighteenth century, most women remained dependent on men for money and transportation, virtually enslaved by homemaking. TroubleMakers were silenced until the birth of  the industrial revolution which led to the rise of cities and factory work outside the home. While dirty and dangerous, those jobs did give some women a peek at an unprecedented autonomy afforded by earning one’s own wages.

This experience was made even more mainstream during World War I as men were pulled out of salaried jobs making room for women. Those women were left to do what women do best; manage, provide, create, and unapologetically use their talents in ways that hadn’t previously been allowed.

You know, though, even today, unpaid care work often forces women in and out of employment,  negatively impacting our ability to advance our careers or save for retirement. In addition, the gender pay gap and lack of childcare, affordable housing, and healthcare – all exacerbated by the pandemic – continue to negatively and disproportionately impact women’s economic status. Despite advances in the workforce and strides toward equity in policy-making and leadership roles, many working women today are still anxious about living in poverty in their later years.

Elsewhere there are women in 2021 who still do not have the freedom to earn a wage, own or inherit property, or make their own choices. That lack of Independence leaves them vulnerable to exploitation of all kinds. Groups like the Urban Institute, UN Women, and others are working to advance economic autonomy, income security, and freedom from violence for women worldwide. The work goes on as funding allows. But, there’s so much more to do.

Decades before we claimed our right to vote here, the advent of the safety bicycle – with a lower center rail that allowed space for women’s cumbersome clothing – led to freedom of movement for growing numbers of women. The impact was immediate and far-reaching. Physical fitness was improved and alternatives to the standard, restrictive clothing became fashionable. Damn those corsets and bring on the bloomers!

From sharpshooter Annie Oakley to suffragist Elizabeth Cady Stanton, TroubleMaking women of the day commented on this newfound mobility women could enjoy (without chaperones!) on a “wheel,” as they were called.

Womens’ rights leader Susan B. Anthony said: “Let me tell you what I think of bicycling. I think it has done more to emancipate women than anything else in the world. It gives women a feeling of freedom and self-reliance. I stand and rejoice every time I see a woman ride by on a wheel — the picture of free, untrammeled womanhood.” 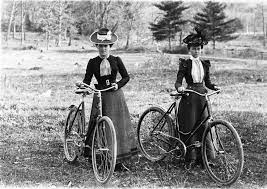 World Bicycle Relief sees the vital role bicycles can play in empowering women and girls in developing regions of the world today. Often a girl student has more domestic chores than her brothers. She may have to travel long distances on poor roads, through dangerous areas to school. With a bike she can get to school on time, ready to learn.

Can we envision true Independence?

Giving a girl access to education ensures she has the confidence and knowledge to make her own choices in life. Trends show that educated girls have smaller families, later marriages, better health, and improved financial situations. In addition, educating girls fosters well-being and freedom of movement for them as well as their communities. Greater Independence for all!

Of course, even with money and movement, women still have more to strive for. The evolution of women’s place in societies varies extensively around the globe. Advancing from human chattel (aka property) to full personhood is progressing in some cultures and not yet in others. TroubleMakers continue to pursue complete Independence for all women. Each of us has an individual and collective role in accelerating that evolution that cannot be overstated.

According to their paper, “How Women Give – and Invest – for Change,” Claire Costello and Jackie VanderBrug (experts in philanthropy and investing) say, “Historically, women didn’t have access to money and power. We still have a long way to go before we reach parity, but we have come pretty far. In fact, women will hold $110 trillion in assets by 2025. That’s an enormous amount. And there’s a lot of power involved in having access to that much capital…giving with a gender lens, which directs resources toward women and girls … is a powerful accelerant of change.”