During what has been called the #MeToo movement or the post-Weinstein era, since 2017, there have been an astounding number of influential men knocked off their pedestals. Most of them were brought down solely by the courage of their victims. It took guts for the exploited to tell their stories and call out their assailants, revealing their own vulnerability to the poison power structure. Our society has yet to admit that all these atrocities are nothing new. That “bad” behavior by the men in charge has long been overlooked and tolerated, written off as “just the way it is.”

Harassment by men in positions of power has been exposed all over, from the corporate world to college campuses. We’ve learned about previously hidden intimidation, molestation, and even rape perpetrated by men in so-called respectable positions of authority or with highly-valued media fame; by entertainers, celebrity chefs, elected officials, scientists, journalists, doctors, and the list goes on. All of this exposure has forced us to acknowledge male privilege and the extent to which women’s potential can be stifled in this patriarchy. Trouble is, there is even more to the story. 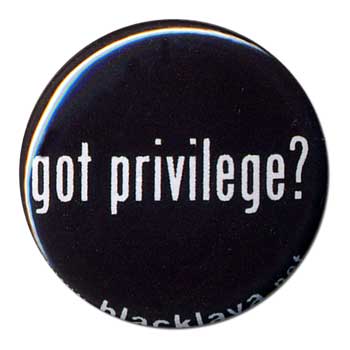 Privilege is defined as unearned access or advantages granted to specific groups because of their membership in a social group. Privilege can be based on gender, race, religion, economic status, ability status, sexuality, age, education level, etc. Privilege is inherently unequal; some people have it, and some don’t. Privilege is granted by society and our cultural norms. We each play a role in accepting and perpetuating privilege. Privilege can involve taking something from one group and giving it to another (Think distribution of wealth.) No one has the ‘right’ to exploit others but, some privileged people get away with it. Privilege grants immunity to certain people.

From a political perspective, rights are principles established by law and imply society’s sense of justice. Under the law, rights are supposed to be equal for all individuals without bias. There are internationally recognized human, economic, social, and cultural rights; civil and political rights. A right is a privilege that is protected by law. Basic human rights are referred to by some as God-given rights. They’re said to belong to all of us equally, simply because we are human. Trouble is, they’re not protected equally by laws. In truth, the U.S. Constitution doesn’t grant us our rights, but it protects those rights it says we are born with.

Most rights today used to be privileges. Not surprisingly, rights are typically protected for the most privileged first. Citizens need to be watchful regarding the distinction because pretending a right is a privilege allows officials to pit one group against another, elevating some groups to favored status and downgrading others to a lower class.

The right to vote in the U.S. was a privilege granted to only white men at first. In 1870 the 15th amendment was intended to extend that right by prohibiting racial discrimination in voting – but only for men. Even then, states found ways to make it difficult or impossible for non-white men to exercise their rights. In 1920 the 19th amendment extended the right to vote to women – but, again, the ability to exercise that right was limited by the privileged, who continued to create barriers to keep non-white people from the polls. Implausibly, voting rights are still not universally protected in the U.S., and, incredibly, in 2022, the John Lewis Voting Rights Act – intended to further protect that right – has been stalled by a Senate filibuster.

Another contemporary example of privilege is evident in how the innocence and vulnerability of white women are prioritized in our society. For instance, we’ve watched the media and law enforcement spotlight a search for the body of one missing white woman. In contrast, thousands of Indigenous women go missing without any honest attempt to find their murderers. White women are cared for and grieved for because of the political worth of their whiteness, while Black women and women of color are perceived as less valuable and, therefore, disposable across institutional and political structures.

In 1988 Peggy McIntosh, a Wellesley College women’s studies scholar, wrote a paper entitled White Privilege and Male Privilege: A Personal Account of Coming to See Correspondences Through Work in Women’s Studies. In it, she listed 46 examples of white privilege. She asked herself, “on an everyday basis, what do I have that I didn’t earn?” Good question and one we might all ask ourselves.

Today most of us probably think we have a right to access decent housing, healthy food, medical care, and a living wage. But, there is no law to mandate that these basics be available to everyone. If you enjoy them, you are privileged in this society.

White privilege is nothing to be ashamed of, but an implied responsibility is attached. Those of us who are able-bodied, for example, should do all we can to assure accessibility to resources for the disabled. Likewise, those of us privileged to enjoy decent housing, healthy food, medical care, and a living wage should KNOW THAT WE ARE PRIVILEGED. 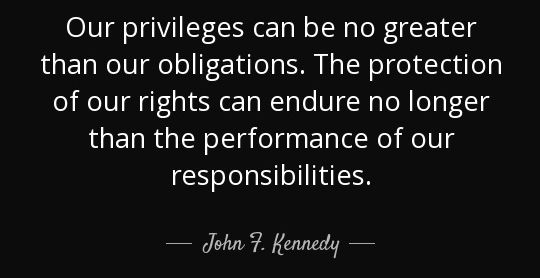 When someone tells you to “Check your privilege,” they are suggesting you recognize the advantages you enjoy – through no fault or action of your own – due to a social category you just happen to belong to. A distinction you didn’t ask for and can’t deny.

*Seeing that so many Americans do not enjoy protected rights to life’s basics is part of the drive behind Trouble.

*Understanding that our rights are often misrepresented as privilege is part of the drive behind Trouble.

*Recognizing that we can take action to ensure everyone’s rights are protected is the drive behind Trouble.

*Knowing the difference between privilege and rights drives TroubleMakers to do all they can in the fight for equity.

Privilege isn’t a bad word. It only becomes harmful when it’s ignored – when someone views an injustice and says it’s “not my problem if it doesn’t affect me directly.” We must acknowledge our privilege and use it to help those who aren’t equally represented.

“When we identify where our privilege intersects with somebody else’s oppression, we’ll find our opportunities to make real change.” Ijeoma Oluo is a Nigerian-American author of the NYT bestseller “So You Want to Talk About Race.”